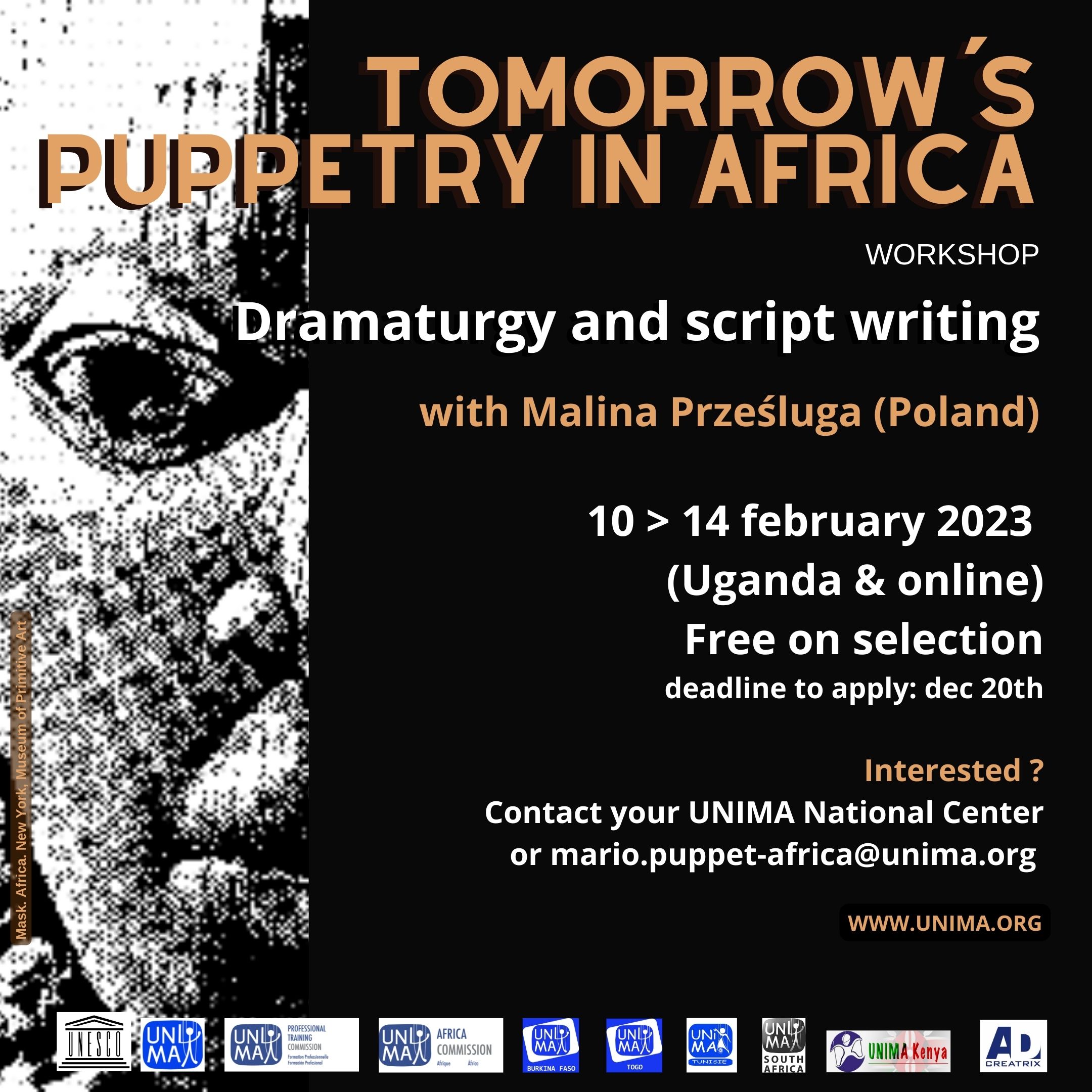 A training cycle for the puppetry artists of the African continent.

UNIMA international, its commissions Africa and Professional Training, in collaboration with the National Centres of UNIMA in Tunisia, Kenya, Togo, South Africa, Burkina Faso and the representative in Uganda, launch together a training cycle in 2023 for puppetry artists of the African continent on the theme: Dramaturgies and digital experimentations.

For this project, the partners wish to work with other National Centres and representatives from the continent who are invited to apply after having read the call for applications by writing a letter of motivation to mario.puppet-africa@unima.org.

Five trainings will be held from February to June 2023.

The call is launched for the first two trainings which will take place from 10 to 14 February.

During five sessions of 3 hours each, we will approach some relevant aspects of writing for puppetry.

Between tradition and innovation, conservation of a heritage threatened by disappearance and creative research, the art of puppetry is multiple. We will insist on the diversity of the approaches, the steps, and the aesthetic proposals, by considering that a didactic of the puppetry expression must take into account a complex dynamics where it confronts the paradox of wanting to objectify the singular expression of the artists.

We will approach the notions of argument, plot, dynamic development, actant, role, actor, sequential cutting, manipulation as an act of writing, and finally, storyboarding. This document will be used as a guide to move on to the actualisation of puppetry, where the concept is confronted with the possibilities of its concrete materialisation. Writing, confronting, rewriting.

Scriptwriting and dramaturgy
Facilitated by Malina Prześluga, Poland
Organised by Denis Agaba – UNIMA representative in Uganda, offered in Uganda and in distance learning
Open to 48 English-speaking trainees (groups of 8 people in 6 countries) on the African continent

First workshop of the English-speaking cycle of three weeks of training, separated by a period of a few months that will allow the selected trainees to work autonomously towards the final objective of the project. The three training sessions are continuous and result in a final product.

This first workshop is an introduction to writing for puppetry. My method is to make the writing process a combination of intuition and the specific rules of puppetry. The participants will be guided through the writing process, focusing step by step on each important part. After some theory, we will start the practice with writing tasks and exercises that are mainly aimed at discovering your own ways of trusting your intuition (which is essential for any artistic process), but also at making some dramatic miniatures, scenes or even short one-act plays that will serve as a starting point for further work.

Hassen Mouedhen is a Tunisian playwright, director and trainer. He is one of the founding members of the Tunisian puppetry troupe, which became the National Centre for Puppetry Arts in 1977.

He is currently artistic advisor and trainer at the Ecole Pratique des Métiers de Théâtre, affiliated to the Tunisian National Theatre.

He has created several puppetry shows for children, young people and adults, including “Hannibal”, ” The Nightingale and the Rose”, “Dying to Adore”, “The Master and the Slave”, and “In the Storm”.

Born in 1983, Malina Prześluga is author of books for children and wrote more than 60 plays for adults and youth. Her dramas are published and staged in many theatres in Poland and abroad (for example in France, Great Britain, Ukraine, Croatia, Czech Republic, Hungary). She won different prestigious prizes including the Gdynia Drama Award (twice, in 2020 and 2022) which is the most important Polish distinction for authors of dramatic texts, for the drama The fool (2020) and You are still here (2022). In the year 2020, she also received the Arts Award of the City of Poznań. In 2016 she was honored by the Minister of Culture and National Heritage for her achievements in the field of literature and drama for children. Her plays were translated to: French, English, German, Czech, Bulgarian, Ukrainian, Romanian, Belarussian, Russian, Croatian and Hungarian.

This project is supported by UNESCO and coordinated by UNIMA Internationale in cooperation with its commissions Unima Commission Afrique and UNIMA-Professional Training Commission and in partnership with National Centres of UNIMA in Unima Tunisie, Togo, Kenya, UNIMA SA (The South African Association of Puppetry), Unima Burkina, and the representative of Uganda.