The more meetings there are, the more exchanges that take place between nations, the better individual relations are : collaboration, solidarity and comradeship are no longer empty words, but the foundations for a better understanding of human problems and a bringing together of nations. 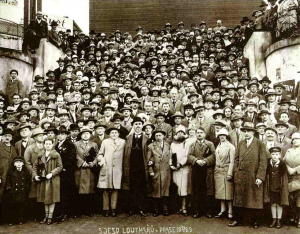 The idea to found an international puppeteers organisation germinated since 1928 after the 2nd Puppetry exhibition in Baden-Baden and the Meeting of Cultural Unions for the Advancement of Puppetry.

The history of UNIMA began in Prague, Czechoslovakia, on the 20th May 1929 at the occasion of the Fifth Convention of the Czech Puppeteers, an event to which guests had been invited from Bulgaria, France, Yugoslavia, Germany, Austria, Romania and the Soviet Union.

In a friendly atmosphere, on a suggestion of the French journalist and author, Paul Jeanne, the international association of puppeteers or UNIMA is created. Establishing its head office in Prague, it’st then the first international association of theatre in the world. UNIMA in a short time built itself up from a small circle of friends into a world organization. The first members of UNIMA came from the world of puppetry but half of founders came from other professions. The fundamental founding principle of UNIMA was : reject any barriers to cooperation

Unfortunately, the members were not able to maintain the frequency of their meetings for long time. After Prague there was another Congress in Paris, also in 1929, then another in Liège in 1930. But the Congress, in Ljubljana in 1933, was the last before the outbreak of the Second World War in 1939.

However, the war was not able to break the relationship that the puppeteers had established, even if their meetings had to be arranged in secret, sometime via the most daring routes. These were necessary to keep these contacts alive. This “test of fire” demonstrates the power of the solidarity which characterized the early period of UNIMA.

The world had changed a lot since 1939 but international tensions between two “blocs”  did not stop increasing. The needing to reactivate international initiatives and recreate the contact between East and West was felt.

It was in 1957 that the Czechs made the initiative, for the first post-war meeting of UNIMA. During the Week of European Puppetry in Braunschweig – a city of Federal Republic of Germany located at the border with Democratic Republic of Germany, the Czech Jan Malík, the last Secretary General of UNIMA before the war, organized some discussions on the rebirth of the association. A congress was convened. The same year, at the 5th Congress in Prague, the activities of UNIMA were re-launched under the impetus of young artists with new ideas and methods of work.

Seventeen countries are present in this Congress. In difficult times, their diversity shows that UNIMA is able to accomplish great things: United States, India, Indonesia, Mongolia, North Korea (the Korean War 1950-1953 is not so far), Vietnam (war of decolonisation finished in 1954).

In this context of Cold War, UNIMA tries to apply the democratic principles according to its statutes, never lost its humanist and friendly values, and being always able to take important decisions even if it was not always easy.

Because of UNIMA’s important presence in the Soviet bloc there was a need to a create neutral and democratic forum for discussion and so the statutes stipulated the parity between representatives who came from Western and Eastern countries in the Executive committee.

In the sixties, a new generation of UNIMA members established new policies in the work of the Union.  In 1969 UNIMA became the “Union Internationale de la Marionnette”.

New statutes allowed the creation of national centres and international commissions. Both became the main cornerstones of the development of the different activities of UNIMA. From a group of friends, UNIMA became little by little a modern and efficient organization.

The general secretary moved the UNIMA office to Warsaw, Poland where it stayed from 1972-1980.

In 1972 the presidium was re-named the executive committee. The same year, Henryk Jurkowski succeeded Jan Malik. In 1980, the head office was relocated to Charleville-Mézières, France, a city renowned for its famous World Festival of Puppet Theatres. This city hosts not only UNIMA, but also the International Institute of Puppetry (IIM) and the École Supérieure des Arts de la Marionnette (ESNAM). There the general secretary of UNIMA carries out its activities and regularly welcomes visitors from all over the world.

Since 1957, the UNIMA congresses have all been linked to important international festivals, still alternating between East and Western countries. In 1980, the congress was held outside Europe for the first time, in Washington D.C., capital of the United States of America. In 1988 there was the first congress in Asia in three cities of Japan (Nagoya, Iida and Tokyo).

In 1992 the Congress in Ljubljana, Slovenia, brought an updating of the Statutes and a great effort undertaken to make UNIMA lively and attractive to new generations of practitioners and enthusiasts.

Among the projects, there was the one of helping not only those wanting to increase their knowledge and competence in the puppetry art, but also to encourage the collaboration in the new areas of exploration, for example in the fields of the education, the training, teaching and therapy.

Since the 1980’s, the number of Centres and members in all the continents increased. To better serve these new centres, new territorial Commissions were formed for Asia-Pacific, Africa, North America, Latin America and Europe. These Commissions were created to facilitate communications and deal with new responsibilities.

One of the hardest projects that UNIMA has decided to carry out was to edit and publish the World Encyclopaedia of Puppetry Art (WEPA) published in French in 2009, *(this preceding phrase is new- add to French and Spanish versions) and then translated into English and Spanish. With the partnership of UNESCO, the publication of the “Encyclopédie Mondiale des Arts de la Marionnette” is not just the realization of a founders’ old dream (the project was proposed since 1970’s) but also represents for all puppeteers and thousands of enthusiasts in theatre, an essential source and a proof of the recognition for this branch of the theatre arts.

Benefiting of the title of “Official partner of UNESCO“ (consultative statute), UNIMA was entrusted by UNESCO with the assessment of the dossiers about the classification of master pieces of the oral and intangible heritage of humanity concerning the puppetry.

The puppet can be found in every genre of the contemporary performing arts. In theatre, film, celebration, ritual, education, and healing, like each art, it is a means of bringing peoples closer together and of fighting against intolerance and violence.

UNIMA is responsible not only to its members but to all whose lives have been enriched by the spirit and beauty of the puppet. The association has made a long journey since its foundation and, today, enjoys a certain prestige in the cultural world.