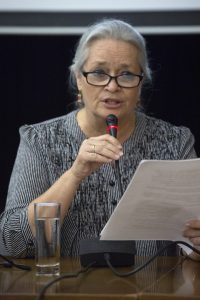 Karen Smith, born 1954 in Australia, trained and worked as a puppeteer, designer and builder at the Shri Ram Centre Puppet Repertory, Jan Madhyam, and Ishara Puppet Theatre in New Delhi (India), and studied Javanese wayang kulit at Sanggar Redi Waluyo in Jakarta (Indonesia). From 1986, she was a member of UNIMA India, and later a board member of UNIMA-USA (2007-2014) and its President (2008-2010). She has attended international conferences and participated with curations, presentations and consulting in puppetry as a cultural heritage, with a special interest in wayang kulit. In this capacity, she served as curator for several exhibitions of Indonesian Wayang in India and the United States and contributed to a UNESCOphoto documentary on Indonesian Wayang. A member of UNIMA International’s Executive Committee since 2012, she served as President of the Publication & Communication Commission (2010-2016) and was a member of the Research Commission (2004-2012) and the North America Commission (2008-2016). Since 2010, she is the editor-in-chief of the World Encyclopedia of Puppetry Arts (WEPA), responsible for updating and mounting the 3-language 2nd edition onto the website of UNIMA International. Since 2016, she is a Vice-President of UNIMA International and President of the Publication & Contemporary Writing Commission.