During my long life in puppetry I have always been strongly aware of my audience: the children.
I have very seldom heard people talk about this subject,
but it is very important to me and I cannot erase it from my mind.

While performing for children you have an enormous amount of power in your hands.
To use it correctly, you should keep in mind how fragile a child is.
But this does not mean that you take her on a journey through only beauty and soft subjects.
She has the right to live various emotions during the performance:
laughter, tears, sorrow, excitement, anger and fear.
But all these within the framework of the performance.

And then we come to the most important thing: the confidence and security
which you as an artist must build around her during the event.
And building it already starts at the front door, when she enters the theatre.
The whole atmosphere must be gentle and again, secure.

After the experience of the performance, never leave the child confused
and uncertain, but always give her a good solution in the end.
She cannot bear it if she is left in the dark.

Study your audience – I do not mean scientifically, I mean out of your heart.
Try to feel their sensitivity, their expectations, and a miracle ball will start flowing
between you and the children. A ball to enjoy and to bring you together.

All this leaves an unforgettable trace in her mind,
as if put in reserve for her growing-up process,
helping her to become strong, to face the sometimes cruel world.
And also she will know that in our lives there is still much
good left to share and to help us survive.

Dear friend, you might consider my words naïve, but this is the wisdom
I have learned during my long life. 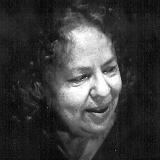 “I am a fool, a jester and a puppeteer. I have a visible soul, my puppet “describes Ms. Sirppa Sivori-Asp her life as an actress and work in the puppetry.

The career of Sirppa Sivori-Asp in the field of theatre started actually more than 50 years ago.

The famous Playhouse School of Theatre in Pittsburg, USA welcomed Sirppa Sivori-Asp as a very young student in 1940s. After the school Sirppa started her professional career as an actress at The Municipal Theatre of Turku, Finland.

The love and affection towards puppet theatre was kindled in Salzburg, Austria in the 1950ies, when Sirppa saw a performance of The Salzburger Marionettentheater.

She came tried to establish a professional puppet theatre in Finland, but nobody understood then that the art of puppetry is a real, serious matter for adults and children in our country. Sirppa had to wait until 1971, when she met two other enthousiasts and established

Sirppa Sivori-Asp celebrated at the same occasion her 50th Jubilee as an actress. She was rewarded with the Golden Medal of Finnish Theatre for her unique career within the fields of drama, opera and puppetry in Finland.

By the State of Finland she has been rewarded with a Cross of the Order of White Rose.

In addition to her career in puppetry Sirppa has worked more than 40 years as a TV-director, directed several operas and dramas, taught at the Theatre Academy and universities, played many roles in television, opera and drama theatres both in Finland and abroad, dramatised, written and directed numerous plays and worked with several Finnish and international associations of arts.

Sirppa Sivori-Asp became the member of UNIMA International  in 1972.
In 1992 World Congress in Ljubljana she was elected as the President of UNIMA until 2000.