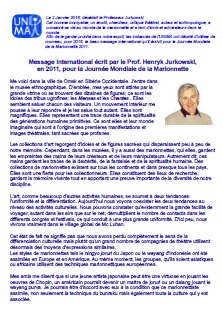 Dear friends around the world,
In the name of all the members of the UNIMA Executive Committee, It’s with enthousiasm and a lot of joie that we wish you a very good World Puppetry Day 2016 !
In January 2th 2016, Professor Henryk Jurkowski passed away.
This incredible personality, a scholar, researcher, theatre critic, author and antropologist, devoted his life to the world of puppetry and has so many friends and admirers around the world.
In order to bring him closer to our spirit, UNIMA’s authorities decided to use again, for 2016, the beautiful international message he wrote for the World Puppetry Day in 2011.
So, we invite you to read this message
As you know, the idea of creating a World Puppetry Day was first discussed by the UNIMA members during the 18th Congress, in Magdeburg, in year 2000.
The official date ”March 21st”, on proposition from Dadi Pudumjee, was approuved in 2002 at the UNIMA Council Meeting in Atlanta.
The first International Message was delivered in New Delhi in 2003 and gained popularity.
It’s now celebrated all over the world.
Dadi Pudumjee
UNIMA President
Jacques Trudeau
UNIMA Secretary General

Get updates
on the World Puppettry Day
on the Facebook dedicated page.