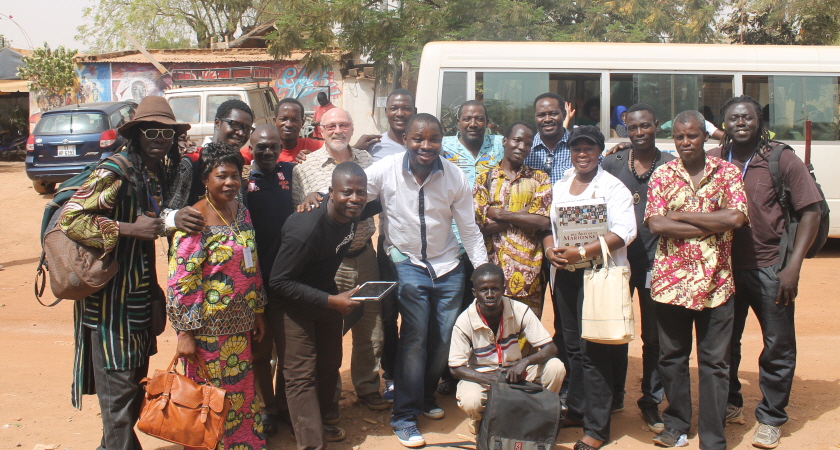 In the frame of the 6th edition of the Festival “Rendez-Vous Chez-Nous” of Ouagadougou, the UNIMA Secretary General accepted the invitation from the president of Commission Africa and the president of the Festival to hold a first historic meeting of 6 UNIMA Centres from West Africa in order to organize in 2016 a meeting of all the UNIMA Centres of the African continent.
The dynamic meeting was held from February 10th to 14th, 2015. Vicky Tsikplonou (Togo), Yacouba Magassouba (Mali), Jude Zounmenou (Benin), Soro Badrissa (Ivory Coast), Boniface Kagambega et Pierre Ouangré (Burkina Faso), Check Kotondi (Niger) and Jacques Trudeau (International UNIMA) participed. Puppeteers from Burkina Faso and several other countries also contributed to the success of this meeting.
The festival “Rendez-Vous Chez-Nous” is organized by the Collective ACMUR (Arts, Clowns, Marionnettes et Musique dans nos Rues). It was held in the French Institute, but, also, under a blazing sun, on the Woman Square located in one of the most culturally dynamic districts of Ouagadougou.
The Collective ACMUR has its counterpart in the city of Nanterre in France and is one of the main financial contributors. The villages around Ouagadougou also got access to shows of hight level from the program, among them the Acrobates Ghanéens, the Échassiers du Togo , the Cavaliers du Naaba, the Grandes Personnes from Boromo, and many artists from France and Belgium.
The Festival move later to the cities of Bobo-Dioulasso and Boromo.
The year 2014 was characterized by the struggle and the liberation of Burkina Faso. The artists of Collective ACMUR hope that the State understands, transforms itself and adapts to the aspirations of this revolution.