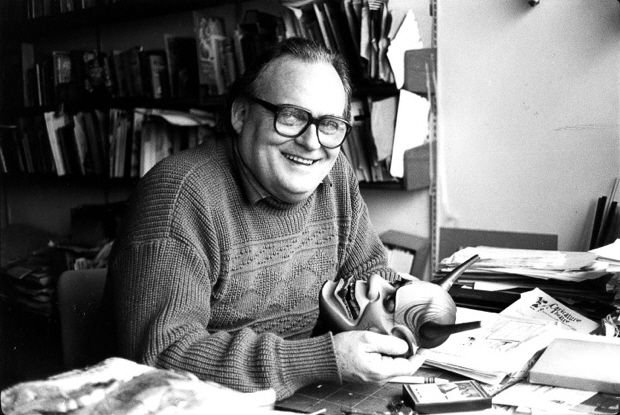 John M Blundall 1937-2014
Sadly I have to communicate to all our UNIMA friends and colleagues that John Blundall, renowned puppeteer and puppet maker, has died in the hospital, aged 77. John’s health had been a bit temperamental over the last year but his death was sudden and unexpected.
John needs little introduction to many in the global puppet community. He was heavily involved in UNIMA, serving on the executive committee for many years and was part of the planning and establishment of IIM and ESNAM. John was also chair of British UNIMA and even after he stepped down from the BrUNIMA commitee continued to be an active and influential voice in BrUNIMA’s activities as an honorary lifetime member.
However, it is for his puppets that John will be largely remembered. His integral role in the Gerry Anderson programmes Stingray, Fireball XL5 and of course Thunderbirds, for which John designed and created the puppet of Parker, Lady Penelope’s chauffeur, brought him global renown and fandom. His love for both Russian puppet theatre and Japanese puppets and masks influenced his design and practice right from the crafting of Parker all the way through his years running the Cannon Hill Puppet Theatre at the Midlands Arts Centre in Birmingham. Under John’s leadership Cannon Hill became a hub of activity producing a prodigious number of shows and providing training and a first job to many British and foreign puppeteers from its opening in 1968 until its closure in 1992. John then moved to Glasgow where he taught, ran workshops and latterly established a collection of puppets, puppet books and other theatrical ephemera at the Mitchell Library under the title The World Through Wooden Eyes, which he ran with Stephen Foster.
Our thoughts and condolences go out to all John’s family and his many friends across the world.
Jeremy Bidgood
Chair
British UNIMA