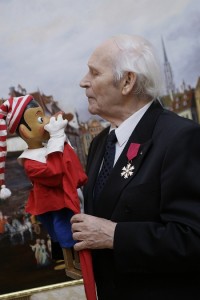 With a great sadness we must inform you that the founder of the Estonian State Puppet Theatre, the Honorary Member of UNIMA Ferdinand Veike has passed away on August 12, 2015, at the age of 90 years.
In 1958 Ferdinand Veike was elected the vice president of the Soviet Centre of UNIMA. He held the post until 1984.
In 1980 – 1984 he was the member of the Council of UNIMA.
He has also been the member of the Board of UNIMA Estonia.
On the UNIMA Congress in Rijeka in 2004 Ferdinand Veike was announced an Honorary Member of UNIMA.