From the contemporary to the traditional and vice versa.Timeless fusion in Indonesia 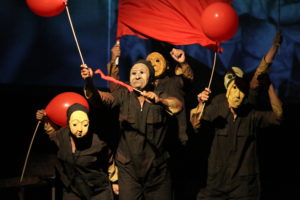 In September 2017 we arrived in Indonesia to take classes in wayang kulit, traditional Balinese puppetry. By chance, our first puppetry encounter was with the Indonesian contemporary puppet company per excellence, Papermoon Puppet Theatre. Through “intergalactic connections”, as I like to call them, the magic of the puppets jumped across borders and connected us with Ria (Maria Tri Sulistyani), founder of Papermoon, whose work I started to follow long ago. We arranged to meet and exchange experiences with some members of the company in the studio-workshop.

When I took off my shoes before entering Papermoon’s studio, I felt surrounded by the magic of their papier-mâché puppets, which were stored neatly in showcases, almost as if they were waiting behind the scenes to come on stage. Giant structures of bamboo cane skeletons hanging from the high walls reminded me of the work of the South African Handspring Puppet company. Everything at Papermoon has a particular stamp of identity. The artistic designer Iwan Effendi gives his characters color and unique personality, so I’m sure if I saw them among a bunch of puppets, I could easily say: that’s Moyo from Mwathirica or that puppet is by Papermoon. The Papermoon stamp can be appreciated in the appearance and precious design, but the company also puts its stamp on the choice of subject matter, filling with color the darker themes of the human being in shows designed for adults.

The brilliant mix of the Japanese puppet techniques of bunraku and kuruma ningyo demonstrates their intimate commitment to the puppet in its manipulation and the stories that “touch” the viewer directly. They deal with contemporary themes, making a sublime combination of two types of traditional Japanese puppet manipulation with an extraordinary artistic approach.

Papermoon brings to light the atrocious errors of a not so distant past and unspeakable genocides, through the tenderness of its characters and the tactile and direct relationship that their manipulators have with them. Papermoon speaks, through the language of silence and visual poetry, of what has long been kept silent – what took place in Indonesia in 1965. In an extraordinary way, the company gives a voice to the victims who remained speechless and to families around the world (not only in Indonesia) who have lost or continue to lose loved ones and their dignity in periods of political violence. In Mwathirica, for example, the puppet’s voice is heard through a small red whistle manifesting different moods of the character. In addition, the red whistle is a symbol for the political moment and the fight against communism that existed at that time which they portray with such truth.

After sharing some days with this company and interviewing Ria in her beautiful home full of color, we left Java knowing that we would be back soon, probably for the next Pesta Boneka International Puppet Festival, from October 12 to 14, 2018. The company has organized a biennial puppet festival since 2008, a unique gathering for puppeteers from all over the world who voluntarily offer not only their shows, but also workshops and knowhow. This encounter of artists and spectators takes place in Yogyakarta every two years and offers the spectator an unparalleled theater event, using puppets of all kinds as a means of theatrical expression.

Papermoon’s commitment to both traditional performance – puppetry – and contemporary engagement is admirable. With their own means, without formal training as puppeteers, they reach theaters and spectators from all over the world and elevate puppetry to its maximum potential. 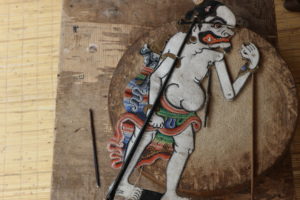 On leaving Java, we were lucky enough to enjoy an artistic residency in Sanggar Paripurna with I Made Sidia. This dalang, or master puppeteer, carries the tradition in his veins. Unlike the members of Papermoon, I Made has dedicated himself to shadow puppets (wayang kulit), painting, topeng mask dance and Gamelan music, since he was a child. He inherited this tradition from his father, also an artist and a respected dalang, and he has transmitted it to his children, whom we had the fortune to meet. The figure of the dalang is highly respected in Balinese culture. Apart from mastering the different Balinese arts, they must know the ancient dialect used in wayang kulit puppet performances and create their own leather puppets. In other words, the dalang is a master of arts par excellence.

Along with acclaimed Australian director, actor, writer and puppeteer Peter J. Wilson, I Made co-directed the famous Bali Agung show performed daily at the Safari Park in Gyaniar, Bali. I Made has also given workshops and has danced and performed wayang kulit in different parts of the world.

We learned about the different ways of performing the same wayang kulit, depending on the story or legend in question, and whether it is going to be performed in the dark with light behind the screen or in daylight, as is done in ceremonies.

In fact, similarities could be found between the closeness that Papermoon has with its directly manipulated puppets and the close relationship the dalang seeks with its characters. Through delicate work and careful aesthetics, the dalang gives color to his puppets to be able to watch them, distinguish them and connect directly with the character, through voice and movement.

During our stay, we shared dinners and talks with I Made in his kitchen. He was curious about other artistic manifestations of puppetry, because he is very interested in the exchange of cultures.

The Bali Agung show rivals the mega productions of the Cirque du Soleil. It is a tale in images and music about the origin of Bali, based on a 12th-century legend, using puppets of all kinds: shadows, direct manipulation with UV light, giant rod puppets … Entering the backstage area of the huge Safari Park stage with I Made, five minutes before the performance begins, and witnessing the affection expressed by almost 200 artists who participate in the show, is itself a spectacle that deserves a mention. Each day before the performance, with their costumes and makeup accurate to the smallest detail, all the artists go through a small temple in the darkness behind the stage to give offerings to the gods. Although they only rest on Mondays and have been doing this work for almost 10 years, I would dare to say that each one of them feels honored to participate in this production, from the narrator dalang to the performer who parades with the elephant, the children who run behind the king and the dozens of dancers. The work done by each and every artist on a daily basis is fascinating.

We also had the honor of performing our little show in the “downstage” of the theater in front of the entire cast of Bali Agung. After seeing Bali Agung for the first time, we set up our small stage with our marionettes and contact juggling balls and performed our humble performance. I remember feeling overwhelmed by the size of the audience and the number of artists and the attentive and warm looks they gave us during our performance, and the enthusiastic applause at each change of scene. At no time did we feel judged or belittled – quite the contrary. Not only I Made, but the Balinese culture – and, I would dare to generalize, the Indonesian culture too – is infinitely respectful and tolerant, always open to learning and combining with western contemporary arts.

The main aim of I Made is to convey the richness of Balinese culture in its different artistic expressions, as well as the relationship of this tradition to Hindu ceremonies. His willingness to combine and learn from other artistic manifestations is outstanding. His latest work with Peter J. Wilson, which we also saw in rehearsal, portrays the richness of Balinese culture in its entirety, taking into account the traditions of gamelan, dance, topeng (masks), painting and wayang kulit. With an original and novel approach, the main action of the representation takes place in the backstage area, offering a look at traditional Balinese art from a totally contemporary starting point.

After having lived for two months surrounded by different artistic expressions of Indonesian puppetry, I experienced a transition from the contemporary to the traditional and vice versa. I wonder what the dividing line is between the traditional and the contemporary, and whether such a separation is relevant to this moment of artistic richness and timeless fusion that celebrates the precious art of puppetry.