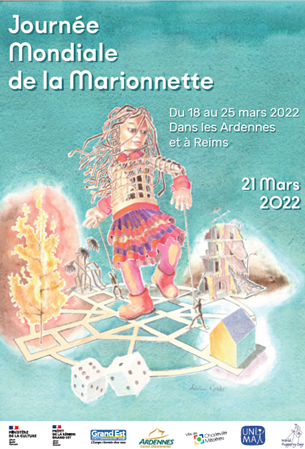 We want the World Puppetry Day 2022 to be close and local. We want it to be radiant and overflowing with energy through events, workshops, meetings, visits and discoveries of places, school or public performances and games. We want to offer you the surprise and register this year’s March 21 festival, from the weekend of March 19 and 20, for nearly a week of events. Nearly twenty partners and cultural actors of the Ardennes and the Grand Est region have responded to offer you this program of festivities. We would like to thank them, as well as the city of Charleville-Mézières and its mayor, Mr. Boris Ravignon, the department of the Ardennes, as well as the Grand Est region, and of course the Ministry of Culture.

A moment of celebration is coming to us. Since 2003, the UNIMA works to register on an international scale a World Puppet Day and to spread as much as possible this joy of creating and sharing the imaginary of the material and the form in a story. This year, you will discover the poetic call of Mrs Ranjana Pandei, Indian puppeteer, all-rounder and humanist, who against all odds, works for the arts of
puppetry and puppeteers in India. You will discover by going to the different places the world video of this year on the theme: Aquatic life and marine worlds. The poster has been entrusted to the South African artist and visual artist Adrian Kohler, known worldwide for his creations and his puppets made within his company Handspring Puppet. We will recognize the giant puppet Amal walking and moving towards the horizon.

The FULL PROGRAMME is available here.

The World Puppet Day is proposed and coordinated by the UNIMA – Union Internationale de la Marionnette
Union, based in Charleville-Mézières.

This event is organized with the support of the City of Charleville-Mézières and the Department of the Ardennes.

UNIMA is supported by the City of Charleville-Mézières, the Department of the Ardennes, the Grand Est region, the DRAC Grand Est and the French Ministry of Culture.
It is an NGO affiliated to UNESCO.