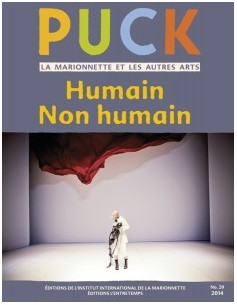 “The puppet is not a miniature of human being: it is both more and less than the actor.”
Designed as a tribute to Brunella Eruli, who directed the review between 1998 and 2012, this issue of Puck gathers, around the theme “Human / Non human”, original contributions of artists and writters, original studies and also an anthology of Brunella Eruli’s papers, most of them were unpublished in French. ï”¿