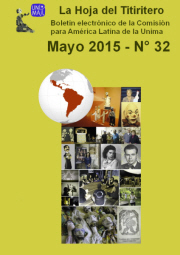 The Master Roberto Lago drafted his newsletter “La Hoja del Titiritero Independiente” on a typewriter, and wrote by hand, on the rear part, the name of the recipients and the addresses before to send it by mail.
At the 21st century, it’s more rapid and easier to communicate.
We will never know what the great figures, as Roberto Lago, would do with Internet.
Since 2004, following the way that he showed us, we maintain present our publication and disseminate a maximum of informations.
So, the Commission for Latina America is very glad to invite you to read the last issue of its Electronic bulletin – “La Hoja del Titiritero” # 32 – May 2015 – Year 12
As always, many informations and very interesting texts, amongst other ones:
One “Personajes Inolvidables”, written by Ana Maria Allendes Ossa and concerning Carmen ANTILLà“N and Luis Alfredo IRIARTE.
An Interview of Frank SOEHNLE, realized by Susy López Pérez, from Mexico, during her visit in the Atelier ARKETAL.
A Dossier written by Ernesto López, entitled “Títeres de Viento, de Mar y de Tierra en Dominicana”.
A chapter “Heritage”, written by Izabela Brochado, about the process which was achieved by the recent recognition, as “Patrimônio Cultural do Brasil Histórico”, of the Puppet Theatre of the Brazilian North-east.