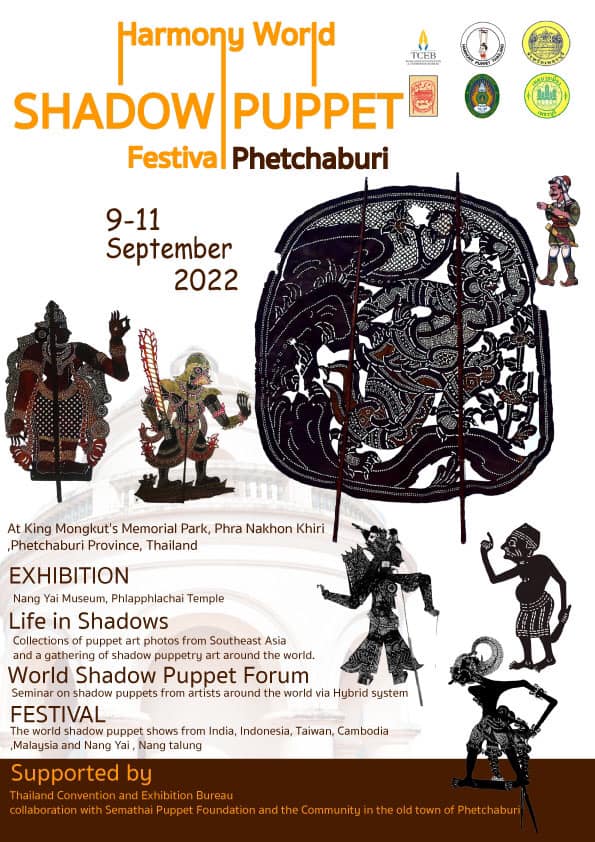 Phetchaburi Province has been a land of inheritance of history, culture, and wisdom since the Ayutthaya period. One of the entertainment forms passed down and preserved today is Nang Yai, which is preserved at Wat Phlapphlachai.

Phetchaburi Province is one of the provinces that preserves this cultural heritage. It has a desire to preserve, study, restore and glorify shadow puppetry. In Thailand, there are Nang Yai troupes, shadow theatres, and large leather puppets all over the country. It explores and builds cooperation with shadow puppet groups around the world from more than 20 countries: from Southeast Asia, such as Indonesia, Malaysia, Cambodia; Asia, China, India, Iran, and Nepal, and elsewhere such as Egypt, Turkey, Syria, Greece, Germany, France, and United States of America.

Together with the Thailand Convention and Exhibition Bureau (Public Organization)-TCEB and Phetchaburi Province by the Governor of Phetchaburi, Harmony Puppet Thailand under the supervision of the Semathai Puppet Foundation’s Mr. Nattawut Petchpromsorn has made this event. Phetchaburi Harmony World Shadow Puppet Festival will be held from 9-11 September 2022.

There will be international puppet shows such as Fusion Wayang Kulit from Malaysia, Sbek Thom and Sbek Touch troupes from Cambodia, Shadow puppet from Taiwan, and Tholpavakoothu Puppet Centre from India.

It is also a gathering of Nang Yai all over Thailand from Wat Khanon, Ban Don, Wat Sawang Arom, King Rama IX, and shadow puppet artists from the south, central region, and the northeastern region. They will also participate in seminars virtually, with a World Shadow Puppet Forum from around the world held at Phetchaburi Rajabhat University Auditorium

This festival will be held at the King Mongkut Memorial Park, Phra Nakhon Khiri, Phetchaburi Province. Opening the festivities is the Life in Shadows exhibition, including photographic works of puppet art from Southeast Asia. Shadow puppets from around the world will be displayed at the Nang Yai Museum, Plubpla Chai Temple with the promotion of tourism public relations. To bring artists and audiences to the old city of Phetchaburi conveys the image of festivities, art, and celebration to the world, building its reputation and supports the community.