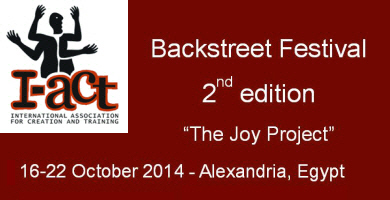 After the success of a first edition, the Backstreet Festival is back in 2014, this year, under the slogan “The Joy Project”, taking place in different venues during one week from October 16-22nd, 2014 in Alexandria, Egypt.
The call is open for theatre troupes from the Euro-Mediterranean region and is targeting the following types of performances: Musical and Improvisational theatre, Street performances, Installations, Multimedia performances, Puppet theatre, Comedy, Clowning, Pantomime.

Performances Application Form
Read more
The Backstreet Festival is organised by the International Association for Creation and Training (I-act), founded in 2004 by the Egyptian theatre director and playwright Mahmoud Aboudoma.