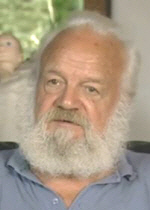 We are saddened to announce you the death of Alain Recoing.
French puppeteer, actor and director. He knew several experiences since his participation, on 1948, in the puppets french theater of Gaston Baty.
He founded, in 1950, the Company of the Three.
He created for the television the weekly show Martin-Martine and took part with his puppets in many great dramas.
In 1957, he founded his own company.
In 1976, The Trip of Mister Punch, written by his son Eloi, and directed by Antoine Vitez, gave birth to his new company, the Théâtre aux Mains Nues.
He has led a tireless militant activity in the successive combinations of puppeteers, training many generations of them.