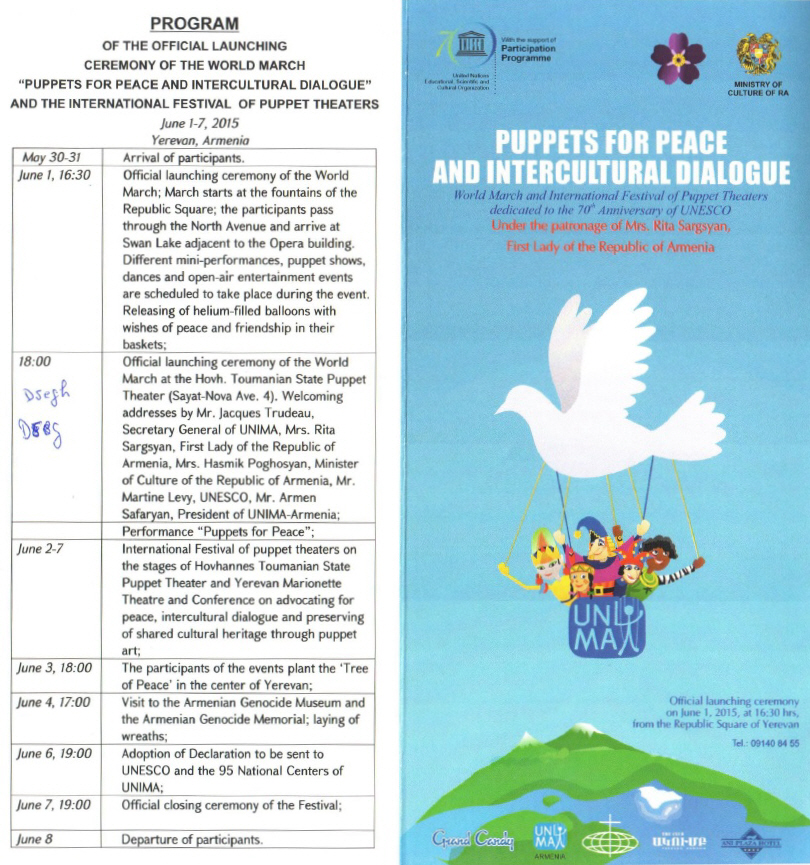 On June 1st 2015, in Yerevan, Armenia, the Official Launching Ceremony of the World March ”Puppets for Peace and Intercultural Dialogue” and the International Festival of Puppet Theatres took place under the patronage of Mrs Rita Sargsyan, First Lady of the Republic of Armenia. It’s with great humility, compassion and friendship that I joined myself to the organizers, the artists of 8 countries, the director of the UNESCO’s Liaison Committee and the beautiful public to commemorate the 100 years anniversary of the Armenian genocide. This World March, dedicated to the 70th Anniversary of UNESCO will end on September 21th, called ‘ World Day of Peace’, in front of the UNESCO’s headquarters in Paris.
For puppeteers and officers of UNIMA Centers around the world who cannot attend the final steps of the March in Paris, I’m asking you, because we are living these days in a world of extreme violence but also of beautiful moments of tenderness to bring your testimony and organize some events in your country, using puppets or objects, to promote tolerance, openness and communication among societies, ethnic and religious groups, neighbours and, sometimes, members of the same family. Please put them on videos, not more than 10 minutes, find a title, and send them to me with your name and address to this e-mail: contact@unima.org.
It will be your way to be present in Paris, via Internet, for the World Day of Peace. It can be a small or big March, it can be a puppet exposition about War and Peace in the World, it can be anything promoting dialogue, communication, peace and harmony what ever forms you want to give them to this video. Together, maybe, we will make the horror go backward, hoping to avoid other genocides.
Many thanks to Armen Safarian, president of UNIMA-Armenia and his organizing committee !
My best regards !
Jacques Trudeau
UNIMA Secretary General